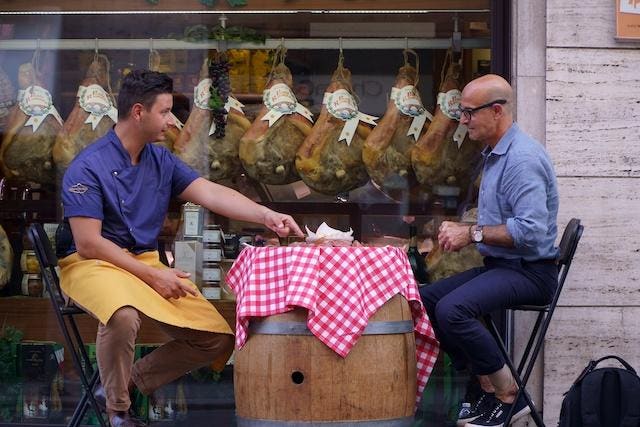 If you ask any Italian which place has the best food in Italy, after their mother’s home, they are likely to point you to the Emilia Romagna region.

In the new, widely-acclaimed food travel series, Searching for Italy, award-winning actor, writer, director and producer Stanley Tucci introduces viewers to some of the places and key players in the region. He breaks bread with and interviews food producers, food purveyors, chefs, activists and other locals—each of whom has helped the region garner and maintain its reputation as Italy’s “Food Valley.”

The “Bologna” episode of Searching For Italy, third in the six-part series, is scheduled to air on CNN at 9PM EST on Sunday, February 28, 2021.

Although the episode is entitled “Bologna,” Tucci visits a number of other cities and towns in the region. Each one has made a seminal contribution to the dominance of the region’s food culture.

Although the pandemic has put most international travel with border closures and onerous travel restrictions, once we can travel again here are some of the inspiring locations showcased on Tucci’s itinerary:

Bologna, the capital of the Emilia Romagna region, is known not only for its world-class gastronomy but also, as the seat of the oldest continuously operating university in the Western world. As such, the city is extremely progressive, its streets alive with students.

It’s a city rich with culinary traditions. Pasta ladies still make, by hand, the city’s pasta trifecta—tortellini, tortelloni, and tagliatelle—for consumption at eateries or at home. Classic Bolognese sauce and bologna (a poor imitation of Bologna’s mortadella) are both named after the city. Here, you can take classes with home cooks and chefs to replicate these recipes at home.

The main square, Piazza Maggiore, is one of the most magnificent in all of Europe. It houses the gothic Basilica di San Petronio, the fifth largest church in the world. The well-preserved historical center is surrounded by picturesque, red-roofed buildings, and is steps away from the two iconic medieval towers (both of which are leaning), often cited in literature and poetry as symbols of the city’s wealth and prestige.

This right-sized, pedestrian-friendly city is filled with diverse cultural attractions (e.g., art, music, history) and boasts more than 25 miles of stunning arcades, the Porticoes of Bologna. Built in different time periods, they have been nominated as a UNESCO World Heritage Site.

Just off the main square is the not-to-be-missed, ancient open-air market, the Quadrilateral. It is filled with shops that have been passed down from one generation to another, from a time when the shop’s underground, cave-like basements were used to keep foods chilled. As you walk the narrow, cobblestone streets, and sip an aperitivo and snack at an outdoor table, the aromas of local meats and cheeses waft through the air.

Foodies know the city of Modena (located in the province of the same name) as the home of Osteria Francescana, Massimo Bottura’s three-Michelin-star restaurant that is often found at the top of world’s best restaurant lists. More recently, Bottura and his wife have opened a boutique, 12-room property, Casa Maria Luigia, named after the chef’s mother.

The province has a rich operatic tradition, too, as the home of beloved tenor Luciano Pavarotti. After his death, the city’s opera house, which opened in 1841, was renamed in his honor.

Car enthusiasts will fall in love with Modena, Italy’s Motor Valley. In addition to being the home of world-famous automakers, Ferrari, Lamborghini, Maserati and De Tomaso, it also houses the Enzo Ferrari Museum, which showcases the life and creations of the automotive giant.

Parma, the capital of the province of Parma, and its surrounding countryside are a mecca for food tourists. The city is probably best known for its two Protected Designation of Origin (DOC) products, Prosciutto di Parma (ham) and Parmigiano Reggiano cheese.

Small farms and producers welcome guests to learn about the production, aging process and traditions associated with these exceptional products. Tortelli and anolini are two of the pasta specialties found in many of the city’s fine eateries and restaurants.

So devoted to food and wine is this area that is has a number of its own dedicated museums, including the Parmigiano-Reggiano museum in Soragna, the Prosciutto Museum in Langhirano, the Salame museum in the Castle of Felino, the Tomato and Pasta museums, the museum of Wine in the Rocca di Sala Baganza, the Culatello museum in the Antica Corte Pallavicina and the Oil museum in San Secondo Parmense.

For its storied art, music and culture, Parma was named the 2020 Italian Capital of Culture.

This small town only has a population hovering around 13,000 people but has its own castle and rich history. Its most famous son is Pellegrino Artusi, who is considered the father of what we now call “Italian” cookery.

Although all recipes and traditions in Italy tend to be regional, it was this former silk trader and businessman who collected 475 local recipes from friends and acquaintances across the country to create and self-publish, Science in the Kitchen and the Art of Eating Well. The book and its time-honed recipes became so popular that it was considered a second bible for Italian families, often given as a wedding gift for new brides. It’s since been translated into Spanish, French, Dutch, German, English and, most recently, Portuguese and Polish.

Casa Artusi, a cooking school and center of gastronomy in Forlimpopoli pays homage to the man and Italian regional cooking traditions.

Rimini is often thought of primarily as a seaside resort because of its sweeping beaches and prime location on the Adriatic Sea but it is filled with history, art and culture. Remains of the starting point of the Via Emilia, the Roman road traversing the Emilia Romagna region from Rimini to Piacenza, can be found in Rimini along with those of several Roman bridges.

A dynamic Mayor has revitalized the legacy of filmmaker and native son, Federico Fellini, by turning the city into a museum without walls. Visitors can see the Fulgor Theater, the cinema that inspired Fellini as a young boy;  an exhibition of his life and history in a medieval fortress, the Castle Sismondo; and the Grand Hotel Rimini he often frequented.

A centerpiece of the city’s revitalization has been the painstaking restoration of Teatro Amintore Galli, which first opened in 1857. During World War II, more than 90% of the structure was destroyed but architects relied on old photographs and drawing to restore its original splendor. It is now an important cultural resource for locals and visitors.

When you visit Emilia Romagna

With much of travel on pause, it’s a joy to follow Tucci as he meets interesting people and explores the uniqueness of each region’s foods, wines, and culture. The format is breezy moving from one location to the next, exploring its traditions.

Searching for Italy is a perfect primo (first course) for a future visit to Emilia Romagna that will entice you to stay longer and travel more slowly.

*All the episodes will be available after their premiere on-demand (schedule not yet available).