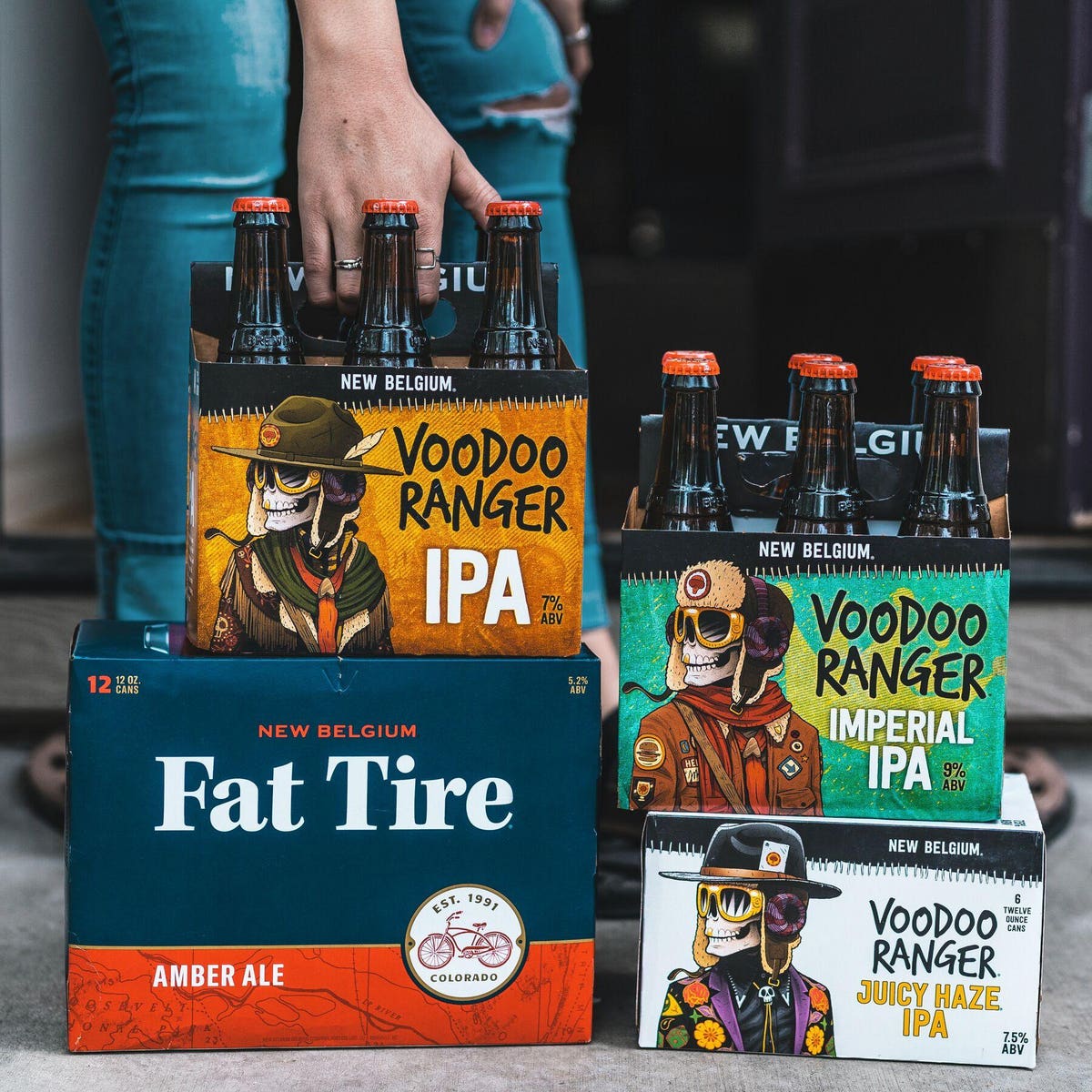 Way back in 2013 — long before craft brewing innovation meant something other than fermenting sugar water and adding fruit flavors — sales of New Belgium Brewing’s flagship beer, Fat Tire amber ale, accounted for 52% of the company’s business.

This year, Fat Tire will make up roughly 25% of the company’s sales.

That mix shift is partially by design, according to CEO Steve Fechheimer.

“We looked at the growth of the IPA category, recognized the uniqueness of the Voodoo Ranger brand, and saw how fans were interacting with it,” he said. “It gave us confidence to make it our lead brand.”

For years, many drinkers saw the Colorado-headquartered beer maker as the “Fat Tire Brewery,” and for good reason. Fat Tire was one of the best-selling craft beers in America, and a regular feature at bars and liquor stores throughout the early 2000s.

But as thousands of new craft breweries opened across the U.S., and as consumer taste preferences began to change, New Belgium was stuck with a lead brand that fewer distributors and retailers were energized to sell.

So, in September of 2018, with the company’s overall sales declining 11%, Fechheimer made a switch.

“I got up on stage at our distributor meeting and very intentionally said that Voodoo Ranger was our number one priority,” Fechheimer said.

A little more than two years later, New Belgium — ranked by the Brewers Association as the fourth-largest craft brewery in the U.S. — now boasts the top-selling IPA brand in the country, according to market research firm IRI.

So how did they do it?

“We’ve stepped away from a lot of other brands, and we’re really clear and consistent about our focus,” Fechheimer said. “One thing that New Belgium — and other players in our industry — are guilty of is moving back and forth between brand priorities. And since that meeting in 2018, we have never diverged from Voodoo Ranger being our top priority.”

The company also forged relationships with consumers who were passionate about things like gaming to help drive meaningful connections with the brand.

“Gaming might be their primary passion, and beer might be a second, third or even a fourth passion for them,” Fechheimer explained. “We haven’t asked them to step out of their community and engage with New Belgium in our brewery or in our craft beer world. We’re going into theirs.”

According to the Fechheimer, craft beer companies too often make their own breweries or beer making process the focus, instead of fitting into what consumers already care about.

The strategy has paid off: Year-to-date through March 21, off-premise sales of Voodoo Ranger Imperial IPA were up 61%, to more than $25.6 million.

New Belgium now has five Voodoo Ranger SKUs on IRI’s list of the top-30 best-selling craft beers, including Voodoo Ranger Juicy Haze IPA which is up 105%. Collectively, they have racked up more than $52.6 million in sales through the first three months of the year.

New Belgium’s focus on the IPA category helped boost volume by about 7%, to around 950,000 barrels in 2020, Fechheimer said.

And while he wouldn’t commit to an official projection for 2021, the company is poised to ship more than one million barrels for the first time ever.

Some of that volume growth will come from the company’s new Fruit Smash hard seltzer, which launched into a $4.3 billion hard seltzer market last month.

To help bring the brand to life, New Belgium has enlisted the help of social media influencers and podcasters Tom Allen (who goes by the name Chad Kroeger, a nod to the lead singer of Nickelback), and JT Parr.

The house party-defending duo, which routinely crashes city council meetings to make absurd requests like constructing a statue of the late actor Paul Walker, or establishing a second Independence Day, is now “smashing hard seltzer shame” in a series of new videos.

Before the creative was unveiled, Fechheimer described the marketing campaign to me as “edgy and bold.”

“Bringing some fun to the category is really important, and from a brand perspective we think there is a real opportunity here,” he said.

So far, Chad and JT have mostly relied on sexual innuendoes and other sophomoric jokes, such as traveling to Ding Dong, Texas to “check out the dongs” and asking strangers if they “like to smash.”

It remains to be seen whether the so-called “party bros” can help New Belgium sell more of its 4.7% ABV hard seltzer, but if not, there’s always NSYNC’s Lance Bass.

Another promo — called Say Bye to Basic — offered consumers a 30-minute window to speak with Bass and compete for a chance to win a year’s supply of hard seltzer.

“We have reason to be confident about the brand and we feel really good about what we’re putting in the cans,” Fechheimer said.