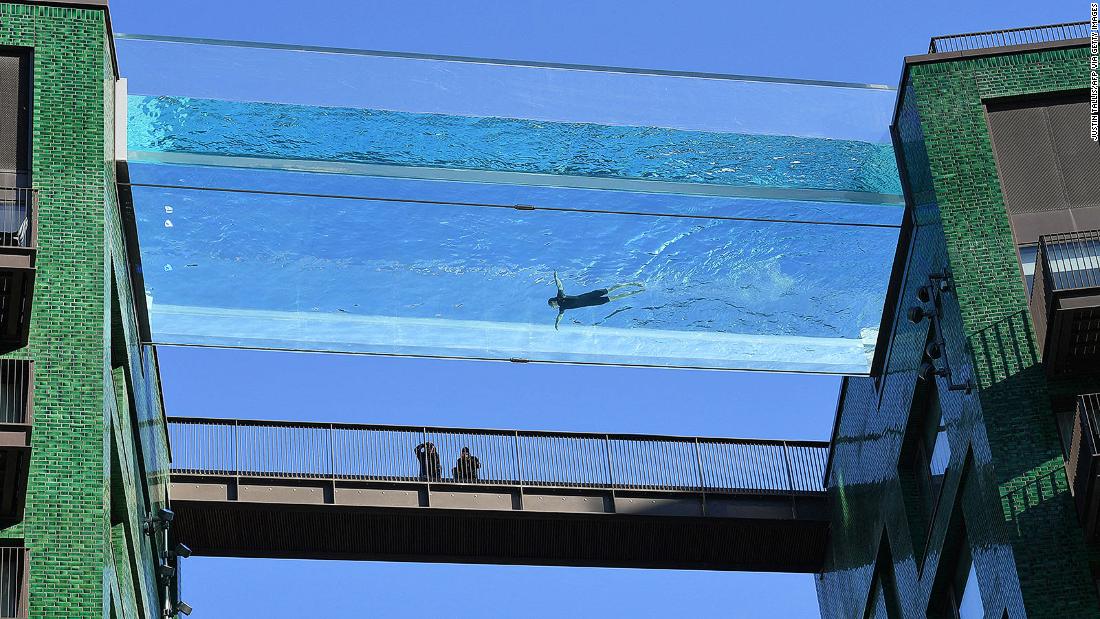 (CNN) — For some, flailing around in a clear box suspended 115 feet above the streets of London is the stuff of nightmares. For others, it’s the ultimate status symbol.

The Sky Pool is a 82-foot (25-meter) transparent swimming pool stretched between the 10th stories of two residential skyscrapers in southwest London’s Nine Elms neighborhood — and it’s only open to the apartment complex’s lucky residents.

It’s the largest freestanding acrylic pool structure in the world and the showpiece of EcoWorld Ballymore’s new Embassy Gardens development, which will also include bars, restaurants and shops.

Located next to the US Embassy and close to the south bank of the Thames, bathers will be able to take in views of the London skyline, including the London Eye and Westminster.

The embassy isn’t the attraction’s only connection to the States — the pool was manufactured in Colorado and traveled 5,000 miles to its new home.

The pool is 10 feet deep and the water alone reportedly weighs around 375 tonnes.

The structure is the work of architects Arup Associates, engineers Eckersley O’Callaghan and aquarium designers Reynolds. Arup is no stranger to complex architectural challenges — one of its most high-profile projects is the Sydney Opera House.

The pool was put through extensive strength testing at the Reynolds factory before making its journey to the UK by road and sea. It was then lifted into place by a 750-tonne mobile crane, supported by a 50-tonne crane.

“The lifting was a precision process, as there was a tolerance of just 30 centimeters in installing the pool into its steel frame,” says Ballymore.

“After a series of technical drawings and behavioral analyses, the dimensions of the pool were decided,” says the Embassy Gardens website.”

With sides 200 millimeters thick and 3.2 meters deep, and with a bottom 300 millimeters thick, the 50-tonne acrylic pool will span the 14 meters between the buildings, with steps and filtrations systems sitting either end, and five modes of lighting to add to the feeling of magic.”

Residents will be able to dive off at one side and alight at the other, which is certainly a glamorous, if damp, way to call in on your neighbors.

This model was dressed for dinner.

“Once you swim off, you can look right down. It will be like flying,” says Brian Eckersley, director of Eckersley O’Callaghan.

Its official opening is May 19, but models have already taken to the waters for promotional shots, one wearing a red dress which seems highly impractical for the purpose but at least guards against upskirt shots from the street below.

The opening ceremony will be hosted by radio DJ Roman Kemp and will feature a performance by synchronized swimming team Aquabatix.

There are 2,000 homes in Embassy Gardens, with prices starting at £1,015,000 for a two-bed ($1.4 million). Nine Elms is a formerly industrial but now ultra-chic neighborhood, with 40 new developments currently in the works, plus two new tube stations.